The Faculties of the University
Technology 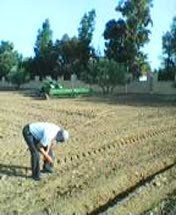 It is in the plain of Mekerra, bordered to the north by the mountains of Tessalah and south by those of Dahia, in 1930, the agricultural school opened its doors on the road that connects Détrie Sidi Bel Abbes and Tlemcen. It extends over 100 hectares, and includes, in addition to the buildings and the experimental station, operating land plus 46 hectares of communal says the o ued Sarno on the road Tessalah

The plain of Mekerra is at an average altitude of 500 meters. The land, which is shallow tuff, 30 cm, is land-lime poor, with low topsoil.

Rainfall is insufficient, is around 400mm, with many irregularities. The temperature is characterized by large temperature variations, late frosts and warm southerly winds, especially European.

If the insignia of the school is a fig leaf, this is especially polyculture that is developed. These are grains, forages and 25 hectares of vines, 4 500 ha of gardening and trees, which will allow students to train for their future profession. The livestock part of a diversified fleet of cattle with two races, one Montbeliard (Eastern Pie red) and the other Tarentaise, the latter having good skills of adaptability to the climate; a pig and poultry park.

The vineyard is planted with conventional varieties, Grenache, Carignan, Macabéo. The vines are conducted either by cup or trellised according to the methods and Guyot Royat form. A unique cave of its kind complements the wine part. We owe to Mr. Georges Cunin, director of the school who had the idea to use the pressure of carbon dioxide from fermentation to make the pumping of must with or without refrigeration. (Cunin system-Delorme).

In 1942, with the landing of Americans in North Africa, the school was transformed into a military hospital. To shelter of any bombing, a large red cross painted on the roof of the building. Obviously promotions covering the period of the war were largely involved in the fighting, and particularly after 1942, with the Army of Africa.

Practical School of Agriculture in 1947 changed its status and became a regional school. As of this date, the degree of the school will be awarded after three years of study. The 1957/1958 academic year will see the addition of two additional years called "preparatory" for the past three years.

With the kind contribution of Mr A.Sardi